The World Innovation Summit for Health (WISH) recently participated in the Generation Amazing Festival 2021, as part of its ongoing partnership with the Supreme Committee for Delivery and Legacy. The festival, which took place between 14-18th December, aimed to inspire a generation that is committed to social change through the power of sport. This year’s theme, “ALL IN”, emphasized the role of youth in the development of their communities.

During the festival, WISH, Qatar Foundation’s (QF) global health initiative, hosted and curated a number of activities for the participants of the festival – predominantly 16- to 25-year-olds from across Qatar and the Arab region. These included art and photography workshops, and a panel discussion focusing on mental health and sports.

Nick Bradshaw, Director of Partnerships and Outreach at WISH, said: “We wanted to be involved in this year’s Generation Amazing Festival as we believe in the power of sport to create positive social impact, and to promote good physical and mental health.

“For young people in particular, the ability of sport to shape their lives for the better should not be underestimated. This is especially true when reflecting on the negative impact that the events of the past couple of years have had on the mental health of our younger population. Access to, and participation in, sporting activities should be both protected and encouraged.” 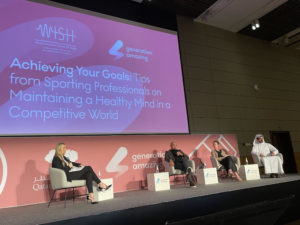 WISH hosted a panel discussion titled “Achieving Your Goals: Tips from Sporting Professionals on Maintaining a Healthy Mind in a Competitive World”, which was also streamed virtually and is available to view on the WISH YouTube channel. Hosted by Nicky Crosby, presenter at beIN Sports, the session brought together a range of current and former sportspeople who discussed their own experiences regarding mental health and the role that sport plays in facilitating positive mental wellbeing.

“You need to have mental strength in order to be successful as an athlete, and belief in yourself has to be the number one priority,” commented De Jong. “In difficult times, having the mentality to come back better and stronger is key. Approach challenges as a ‘minor set back for a major comeback’, and don’t be afraid to ask questions about mental health or speak up.”

Saha recalled how he responded to negative feedback during his career: “I always saw comments from a coach, mentor or teacher as a positive – I took them as opportunities and trusted them so that I could grow from those moments. If I could give one piece of advice it would be to embrace all the challenges and remain authentic.”

Criscione advised against the comparison culture of today: “People are scared to talk about how they feel as they think that will ruin their career. If you’re comparing yourself you are always going to be disappointed, and you will not be focusing on improving yourself.”

Alexandra Chalat, Qatar Foundation’s Director of Community Engagement and World Cup Legacy, spoke about QF’s many sports initiatives, including the ability friendly program started by WISH and Liverpool Football Club in 2017. Chalat shared insights on the importance of making participation in sport fully inclusive, regardless of ability or gender, as well as the benefits of taking an active part in competitive sport.

Elsewhere, award-winning photographer Giles Duley, who lost three limbs while on assignment in Afghanistan in 2011, spoke during the opening ceremony about the importance of overcoming adversity and the role sport can play in empowering people. He gave this year’s cohort of Generation Amazing participants a mantra to take with them into their own lives and careers: “Don’t think about the things you can’t control, but focus on the things you can. Then excel at those. This is what I remind myself of every day, and what has helped me to get through difficult and challenging times.” 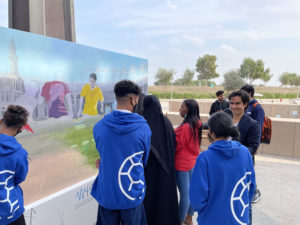 He also delivered two workshops on the topic of “Telling Great Stories Through Pictures with Your Mobile Phone”, while world-renowned Colombian artist Dairo Vargas gave workshops on  “Expressing a Passion for Football Through Paint”, encouraging the use of art as a therapeutic tool that encourages better mental health.

Throughout the duration of the festival, Vargas worked on a mural that represented the Generation Amazing Festival, encouraging participants in the event to join in and add their brushstrokes to the painting.