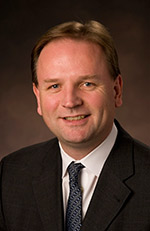 President of the Global Health division at UnitedHealth Group

Simon Stevens is President of the Global Health division at UnitedHealth Group, which serves 89 million people in 127 nations, and manages over $150 billion of health care each year on behalf of families, governments, employers and care providers. As the company’s Executive Vice President, he also directs UnitedHealth’s work on US health care modernization and technology-enabled care innovation. Simon was previously CEO of UnitedHealth’s $30 billion Medicare company, and before that ran hospitals and health services. He served as British Prime Minister Tony Blair’s Health Adviser at 10 Downing Street and the UK Department of Health, and earlier in his career also worked in Africa and South America on economic development and health systems strengthening. Simon was educated at Oxford, Strathclyde and Columbia universities, and has been Visiting Professor at the London School of Economics. He is a member of the board of directors of the Commonwealth Fund of New York, the Nuffield Trust in London, and of Brazil’s largest hospital and health care company. In April 2014 he becomes CEO of NHS England.