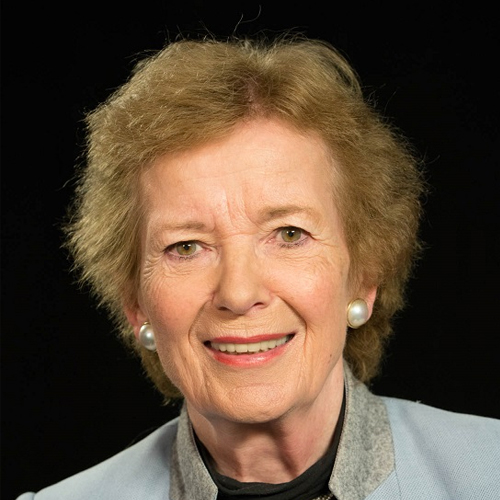 former President of Ireland and member of the ‘Elders’

Mary Robinson is currently a member of the ‘Elders’, a group of independent global leaders, which includes former UN Secretaries-General Kofi Annan and Ban Ki-moon, convened by Nelson Mandela in 2007 in order to tackle some of the world’s greatest challenges. Mrs. Robinson was the first female President of Ireland, serving between 1990 and 1997. She has led a distinguished career, which has included serving as the United Nations High Commissioner for Human Rights. She is also a recipient of the Amnesty International Ambassador of Conscience award, given in recognition of her work promoting human rights. As founder of the Mary Robinson Foundation for Climate Justice, which counts Her Highness Sheikha Moza bint Nasser, Chairperson of Qatar Foundation, as a member of its international advisory board, Mrs. Robinson has a strong interest on the health impact of climate change.