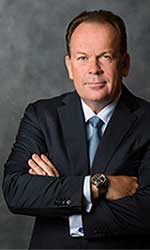 John Dineen is the President and CEO of GE Healthcare, a $18 Billion segment of General Electric Company and the first GE business headquartered outside of the United States. GE Healthcare provides transformational medical technologies and services that are shaping a new age of patient care. With expertise in diagnostic imaging, healthcare IT, molecular diagnostics and life-sciences, GE Healthcare’s broad range of products and services enable healthcare providers to better diagnose and treat cancer, heart disease, neurological diseases, and other conditions earlier. John was appointed to his current role in July 2008. From 2005, John served as President and CEO of GE Transportation, a $4.5 billion global leader in the rail, mining, marine, drilling and wind industries. John joined GE in 1986 as a telecommunications engineer in Rockville, Maryland. He has held a variety of leadership positions at GE, both in the U.S. and worldwide, including general manager of Plastics at GE Advanced Materials; general manager of the Power Equipment business in Plainville, Connecticut; general manager of the Meter business in Somersworth, New Hampshire; manager of finance for GE Asia in Hong Kong and President of GE Plastics Pacific. He also spent 5 years on the Corporate Audit Staff. John is a graduate of the University of Vermont where he earned bachelor’s degrees in Biological Sciences and Computer Science.