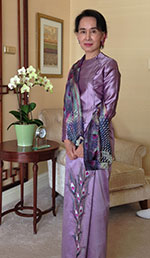 Daw Aung San Suu Kyi is one of the founding members and present Chairperson of the National League for Democracy (NLD) party in Burma (Myanmar). She was elected as a Member of Parliament representing Kawhmu constituency in the by-elections of April 2012. She is also the Chairperson of the Pyithu Hluttaw’s Rule of Law and Tranquility Committee, and the Committees for the Reinvigoration of Rangoon General Hospital and Rangoon University. In her political career, she has been a determined advocate for democracy, dignity and human rights for the people of Burma. She spent decades under house arrest until her release in 2010. For her non-violent campaign, Daw Aung San Suu Kyi was awarded the Nobel Peace Prize in 1991. Since then, she has received more than 130 awards and honors internationally, including the Sakharov Prize for Freedom of Thought from the European Parliament (1991), the Jawaharlal Nehru Award for International Understanding by the government of India (1993), the Companion of the Order of Australia (1996), and the United States Congressional Gold Medal (2008). The Lady continues to launch initiatives to establish the rule of law, promote national reconciliation and encourage constitutional reform. As a patron of non-profit organisations, she remains committed to supporting humanitarian causes and projects. Daw Aung San Suu Kyi holds degrees from the University of Delhi, St. Hugh’s College (Oxford), and the University of London.